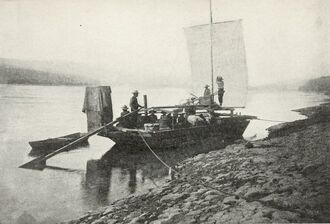 Klondikers sailing toward Dawson on the upper Yukon River 1898
​When the ice cleared out of the lakes and river, we put our outfit in a Lake Bennet boat and started for Dawson. We had a good team of dogs, and of course we piled them on top the outfit. That Spot was along—there was no losing him; and a dozen times, the first day, he knocked one or another of the dogs overboard in the course of fighting with them. It was close quarters, and he didn't like being crowded.

​"What that dog needs is space," Steve said the second day. "Let's maroon him."

​We did, running the boat in at Caribou Crossing for him to jump ashore. Two of the other dogs, good dogs, followed him; and we lost two whole days trying to find them. We never saw those two dogs again; but the quietness and relief we enjoyed made us decide, like the man who refused his hundred and fifty, that it was cheap at the price. For the first time in months Steve and I laughed and whistled and sang. We were as happy as clams. The dark days were over. The nightmare had been lifted. That Spot was gone.

Dawson during the Gold Rush
​Three weeks later, one morning, Steve and I were standing on the river bank at Dawson. A small boat was just arriving from Lake Bennett. I saw Steve give a start, and heard him say something that was not nice and that was not under his breath. Then I looked; and there, in the bow of the boat, with ears pricked up, sat Spot. Steve and I sneaked immediately, like beaten curs, like cowards, like absconders from justice. It was this last that the lieutenant of police thought when he saw us sneaking. He surmised that there were law officers in the boat who were after us. He didn't wait to find out, but kept us in sight, and in the M.&.M. saloon got us in a corner. We had a merry time explaining, for we refused to go back to the boat and meet Spot; and finally he held us under guard of another policeman while he went to the boat.

After we got clear of him, we started for the cabin, and when we arrived, there was that Spot sitting on the stoop waiting for us. Now how did he know we lived there? There were forty thousand people in Dawson that summer, and how did he savvy our cabin out of all the cabins? How did he know we were in Dawson, anyway? I leave it to you. But don't forget what I have said about his intelligence and that immortal something I have seen glimmering in his eyes. ​

​There was no getting rid of him any more. There were too many people in Dawson who had bought him up on Chilcoot, and the story got around. Half a dozen times we put him on board steamboats going down the Yukon; but he merely went ashore at the first landing and trotted back up the bank. We couldn't sell him, we couldn't kill him (both Steve and I had tried), and nobody else was able to kill him. He bore a charmed life. I've seen him go down in a dog fight on the main street with fifty dogs on top of him, and when they were separated, he'd appear on all his four legs, unharmed, while two of the dogs that had been on top of him would be lying dead.

​I saw him steal a chunk of moose meat from Major Dinwiddie's cache so heavy that he could just keep one jump ahead of Mrs. Dinwiddie's squaw cook, who was after him with an ax. As he went up the hill, after the squaw gave out, Major Dinwiddie himself came out and pumped his Winchester into the landscape. He emptied his magazine twice, and never touched that Spot. Then a policeman came along and arrested him for discharging firearms inside the city limits. Major Dinwiddie paid his fine, and Steve and I paid him for the moose meat at the rate of a dollar a pound, bones and all. That was what he paid for it. Meat was high that year.
Proudly powered by Weebly